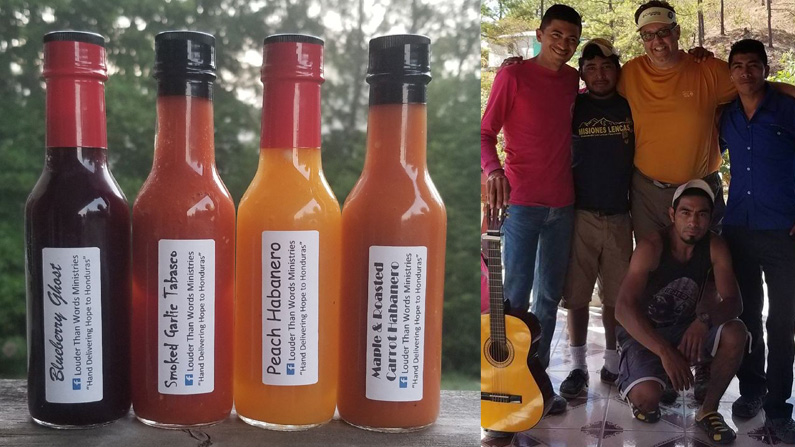 Jeff Moyers is hooked! Hooked on hiking, Honduras and hot sauce. Yes, it’s an unlikely combination, but one that God has been putting together for a lifetime.

Hiking and outdoor recreation has been part of Jeff’s life for as long as he can remember. His early childhood and teen years were filled with hiking, fly fishing, and canoeing trips with his father. Being outside is something he has always enjoyed.

Honduras began to capture Jeff’s heart in 2011, when he was a part of our first Lenca Men’s Conference. Jeff and his pastor, Johnny Byrd, were leaders at the conference. It was there that Jeff met some of our Honduran church planters and missionaries. The stories of those men left an indelible mark on Jeff’s heart.

In 2015, Jeff returned to Honduras for our annual Lenca Backpacking Mission. He was hooked. He had finally discovered a way to bring together his love of the outdoors and for Honduras. He hasn’t missed a year. According to Jeff, “some of my best friends in the world are those Honduran men I hike with every March.”

It was the spring of 2017 when Jeff found himself looking for flowers for his yard at his local Lowe’s Home Improvement store. While in the store, he saw pepper plants and thought, “I’ve always wanted to grow peppers, why not give it a try?” Consequently, he purchased two pepper plants – a habenero and a ghost. His thought was that he might get a few peppers for his own consumption. Little did he know that by late summer he harvested hundreds of peppers and had no idea what to do with them. Interestingly, it was at that time that he was also thinking about fundraising for his 2018 Honduras backpacking trip.

Thus, the idea of gourmet hot sauce as a mission trip fund raiser was born. With just two pepper plants, he made 144 bottles of hot sauce with four different flavor combinations. His random act of purchasing two pepper plants raised over $1600 for his mission trip. In 2018, he double his production, came up with 3 new flavor and raised over $3400! Because he feels like he needs a little “skin in the game,” Jeff purchases all the supplies to package the sauces from his own funds. That way 100% of the donations go toward missions. Through his efforts this year, he was able to fund his own trip, purchase water filtration supplies for two backpacking teams, as well as purchase corn and beans to feed a village that was effected by a recent drought in Honduras.

Interestingly, it doesn’t end with raising funds for missions. Jeff adds that his biggest supporters are non-believers. They know that it’s a fundraiser for a Christian mission and they are still eager to purchase the hot sauce. Who knows, maybe there will be residual Kingdom effects from hot sauce purchases. At least that’s Jeff’s prayer.

Who would have thought? Hot sauce as a mission trip fundraiser. Jeff’s story is a great example of what hard work and a little creativity can accomplish. Jeff is already gearing up for 2019 production. As with the beginning he says, “It’s God’s ministry, not mine. We’ll wait and see where He takes it in 2019.”

If you would like to get in on the action next year or if you have questions about making your own gourmet hot sauces, you can contact Jeff directly at: jeffmoyers@charter.net

Be on the lookout . . . we may have some of Jeff’s hot sauce in our merch shop before Christmas!

You have Successfully Subscribed!